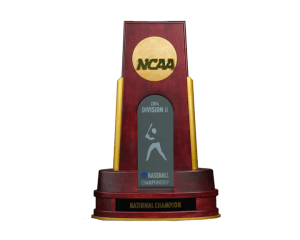 The College Baseball World Series pits the best NCAA baseball teams against each other. Teams face off in a grueling playoff format consisting of Regional and Super Regional tournaments before they even qualify for the CWS. Over the past 10 seasons, the winning teams have been quite diverse, but there are two teams that have each managed to win the championship twice over that timespan.

Looking back at the past CWS winners doesn’t exactly guarantee success in determining successful betting outcomes in future seasons, but there are a few trends worth picking out. For example, you can identify which programs have a winning culture and know how to get to college baseball’s biggest stage. Other lessons include not counting out the underdog, as some teams manage to slip through the cracks and defy all College Baseball odds to win the national championship.

Over the last 10 NCAA College World Series tournaments, the champions have been the following:

This list shows that college baseball isn’t as predictable as other sporting categories. The way the tournament format is, there are more chances for favored teams to lose.

The NCAA baseball postseason is reminiscent of College Basketball’s March Madness in that anything can happen. It creates a better experience for fans, but a frustrating one for bettors.

On the other hand, it sets up some potentially lucrative wagers with underdog CWS odds and payouts.

The list of past winners shows a diverse field of winners, but if you look at their opponents in the finals, you’ll notice what could have been some repeat champions. Of course, any school would love to claim the title of multiple titles over 10 seasons, but that wasn’t the case with this last batch of matchups.

In 2010, South Carolina made it to the College World Series. They lost their opening match to Oklahoma but then won 4 straight to make it to the Finals against UCLA. They won Game 1 7-1 and Game 2 2-1 to go on and win the National Championship. Centerfielder Jackie Bradley Jr. won the CWS Most Outstanding Player Award. They finished the season with a 54-16 overall record.

In 2011, they were the #1 seed after the regular season. They again had a shaky early start, but Gamecocks were able to output solid pitching, defense, and hitting to run through the College Baseball Regionals and Super Regionals to get to another College World Series. They beat Texas A&M and Virginia to get to another final against SEC rivals Florida. They bested the Gators 2-1 after 11 innings in Game 1. They beat the Gators 5-2 in Game 2 to win a second-straight title. The Gators were the favorite to win, but USC refused to back down.

Against all odds, the Gamecocks made it back to the CWS Finals in 2012. It was a more difficult task this time around since they had a weaker team than in years past, at least on paper. They were seeded lower and considered the underdogs. After defeating Kent State and Arkansas, South Carolina was swept by Arizona in the Finals. No other team has come close to their dominance in the past few years. The Gamecocks are not what they once were, but they’ve shown they know how to win even with their backs against the wall. They are one of the most successful teams in NCAA baseball history.

As you can discern from the list, you can tell when certain teams were dominant. For example, South Carolina almost had 3 straight titles, then they fell completely out of contention. Vanderbilt and Virginia got to play each other 2 straight years. Vanderbilt later made it to the CWS Finals in back-to-back years, winning in 2019) but losing in 2021. VA hasn't returned to date.

Part of the allure of NCAA baseball is that any team can win at any point. In some cases, the dominant teams live up to expectations. Other times, an underdog rises through the ranks and surprises the field. This was the case for the 2018 winner, Oregon State. They were a #3 seed and their opponent, Arkansas, a #5 seed. It comes down to which teams want it more. For up-and-coming teams, this recent trend gives hope that anyone can make it through.